As Libya Tries Peace, a Saharan City Builds It

Over 200 Ubari residents gathered in September to formally inaugurate the open-air marketplace, which includes a community park for recreation. Local civil society groups helped develop it with support from USIP and funding from the United Nations’ World Food Program.

A central marketplace — where many of Ubari’s 35,000 residents buy produce, household goods and other essentials — has always been a core of the city’s life and economy. But the old market was forced to close during a three-year surge in fighting between the area’s ethnic Tebu and Tuareg communities.

Over 200 Ubari residents gathered in September to formally inaugurate the open-air marketplace, which includes a community park for recreation. Local civil society groups helped develop it with support from USIP and funding from the United Nations’ World Food Program.

A central marketplace—where many of Ubari’s 35,000 residents buy produce, household goods and other essentials—has always been a core of the city’s life and economy. But the old market was forced to close during a three-year surge in fighting between the area’s ethnic Tebu and Tuareg communities.

Building peace and better governance in Ubari and Libya’s vast Fezzan region is important not only to Libya’s national peace process but also to better security across the Sahel, Maghreb and Mediterranean regions.

Ubari and Fezzan’s other cities are transit hubs for trafficking of weapons and fighters across Fezzan to conflict zones in the Maghreb and Sahel — and for the smuggling of refugees from sub-Saharan Africa to Europe. Ubari is close to Libya’s largest oil field and protests by Libyan youth in recent years have forced different fields to shut down production. Ubari has been the site of efforts by the Islamic State (ISIS) to build a foothold in Fezzan.

Ubari’s new marketplace and its boost to the community, notably to the lives of many of the city’s women, show what can be achieved at local levels even when national-level peace processes and economies are struggling. Libya’s interim government is leading the country to national elections, set to begin in December, that Libyans hope can promote lasting stability.

But the gains are precarious. The coming elections pose a serious risk of violence, and they will not resolve deep disagreements among people from Libya’s three main geopolitical regions over how to structure a permanent government and decentralize power.

Residents of Fezzan and other regions insist on changing what they say has been their sharp political and economic marginalization, notably under the 42-year rule of Muammar Qaddafi. Other factors, including the presence of foreign mercenaries, also complicate national peacemaking. But local peace processes have halted or averted fighting in Ubari, in the nearby Saharan city of Sebha, and in the Nafusa Mountain region, near Tunisia’s border.

While Ubari and Fezzan avoided the worst of the warfare that shattered northern Libya during the 2011 overthrow of Qaddafi, the continued national power struggle combined with southern rivalries to ignite fighting in Ubari and other parts of Fezzan beginning in 2014.

In particular, Ubari suffered warfare between the ethnic Tebu and the Tuareg, two non-Arab groups indigenous to the broad Saharan region that were marginalized under Qaddafi’s rule. The fighting, which killed hundreds of people, was ended only through a cease-fire brokered by outside parties and a peacekeeping force from a neutral tribe. 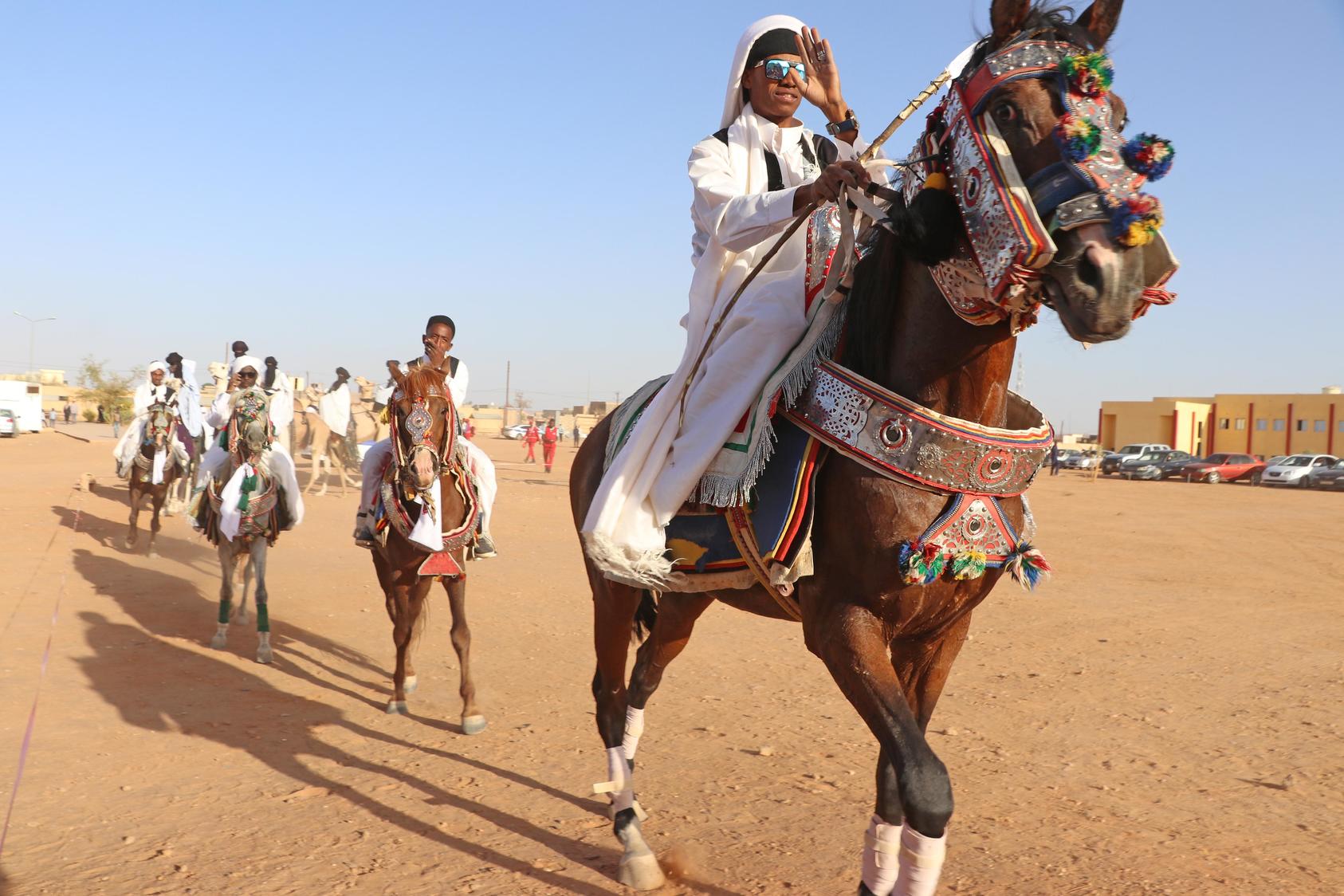 Residents of Ubari, Libya gather to celebrate the International Day of Peace, September 21, 2019. A local peace agreement signed that day halted years of violence between warring tribes in the area and paved the way for the opening of a new marketplace.

Over the past two years, even as fighting continued in other parts of Libya, civic activists in Ubari and the Fezzan region continued to build peace. Ubari’s peace process has been energized by the Azgar Association, a local group of women peace and human rights activists whose members come from several of the city’s ethnic communities.

A vital partner has been the Fezzan Libya Organization, a civic improvement group drawn largely from among the region’s youth. USIP supported these groups, notably by helping to guide community dialogues in Ubari that led to a 2019 pact that helped avert violence when Tebu-Tuareg tensions suddenly spiked in that year. A cross-tribal youth organization called I Am a Volunteer, which was created through a USIP project, contributed to the market opening and other local peacebuilding projects.

The city’s improved stability let local organizations — Azgar, tribal youth leaders and farmers’ representatives — work over 15 months to build a new city market. “On top of Libya’s conflict, which has destroyed some infrastructure and has let other systems collapse, including the irrigation and agricultural systems that once fed Ubari and much of the country, now the COVID-19 pandemic has made food more expensive and left many people unable to buy it,” said Rawad Halabi, the World Food Program’s Libya country director.

“Rebuilding Ubari’s central market and organizing its management by a body that is inclusive of the city’s community can improve food supplies, reduce costs to buyers, support local farmers and help the city’s most vulnerable people,” she said.

The new market is designed to achieve many of those goals. Among its more than 75 stalls and shops the market has set aside specific spaces for women and for small-scale vendors to offer products, and the physical layout includes features to ease accessibility for people who use wheelchairs — an innovation in a region where infrastructure typically does not make provisions for residents with disabilities.

The Azgar Association and other civic leaders have pressed for a much broader, more inclusive management committee than in the past for the market. Ubari’s municipal authorities formed an official committee to run the new market, and now the civil society groups are pressing to add provisions that would include all the city’s tribes and help ensure that the market fulfills its role of promoting social cohesion.

Community leaders in Ubari say the new market is particularly valuable in the city’s peace process because it underscores to ordinary people the tangible improvements to their lives that come from building and preserving peace. “I praise the role of international organizations and the importance of projects that work to support stability and restore life to the city,” said Ahmed Matkou, the city’s mayor. “I also recommend local citizens and farmers to maintain these achievements.”

Ubari’s advances in peacebuilding have drawn notice in places like Sebha, a city of 130,000 about 120 miles to the east. Civic leaders in Sebha are planning a dialogue among that city’s rival tribes to allow the building of a cross-tribal market on the Ubari model. Ubari’s progress also has resonated among Libyans working to heal a conflict between ethnic Arabs and Amazigh in the Nafusa Mountains of the west.

Such local advances are invaluable because they demonstrate to Libyans what they can achieve, and they build local leadership and skills to do it. Still, such local advances need to be multiplied and expanded to the fraught process of bringing peace nationally. That process faces a major challenge with next month’s scheduled elections for a transitional government — Libya’s third major attempt since 2014 to advance a national reconciliation after a decade of conflict and violence.

The road ahead for Libya